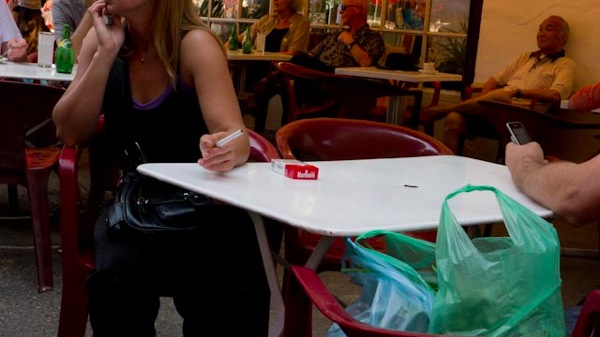 An outdoor table at a café somewhere deep in the heart of Provence. Morning of market day.

Perhaps it's that I haven't been here with my full consciousness intact during the warmer seasons in some time. Six months ago, it was winter, and hardly anyone sat out of doors, even in full sun, with the thermometer hovering in the 50s in daylight. A year ago I was preoccupied with the health and well-being of a loved one, also here, on a valedictory trip, for whom I ended up still grieving six months ago. I was not disposed to take note, as is my usual wont, of the behavior of my fellow humans here in La France Profonde—winter or summer.

This summer, thank goodness for lack of a better to thank, such preoccupations have waned, if not been eclipsed. I am free once again to take note both of the good or bad going on around me.

One thing is certain, and it has more to do with mores and the prevailing statutory winds 3500 miles away in Cambridge, MA, the place I still tenuously call home. It is certain that, if for no other reason than that it is forbidden by law to smoke tobacco products virtually anywhere, I am breathing more freely when back home. The difference between breathing freely in an urban environment, including the out of doors, and otherwise is subtle, that is, until you are otherwise.

I had forgotten somehow that France, both in the urban milieu and in any communal aggregation, such as a town square in even the smallest hamlet, is otherwise for an American. You do not breathe freely. Or let me put it this way, the air is perpetually fragrant with the smell of cigarette tobacco smoldering. Usually it's no further away than your nearest neighbor.

Europeans cling to their habits, and no wonder. Taxed to the hilt—bitch all you want about the United States and the Tea Party nuts notwithstanding, it remains a fact that the marginal tax rate in the U.S. is a mere 27% on average, and topping out at 35% for high income individuals—the French worker pays a marginal tax of 40% of income, as much as 50% if you fall (or have been born or stumbled) into a "high income" category. On top of that they pay a 19.6% sales tax (they call it "value added tax;" which requires a sufficiently whimsical disposition of mind to accept having virtually every consumer article sold made more valuable by the privilege of having its price increased by nearly a fifth). The price of cigarettes and gas may be appalling to us Yanks, but in France, a liter of diesel fuel (the cheapest you can use; which explains the repugnant savor of diesel fumes pervading the air not polluted already by cigarette smoke) now costs about one euro, thirty cents (this computes to $7.14 a gallon. The other day, while waiting to purchase my copy of the local daily paper, I watched a woman write a check for 14 packs of Gauloises Filtre (that would be cigarettes made of two of the most aromatic yet paradoxically milder tobaccos in the world… Turkish and Syrian; it's still tobacco, however, and Gauloises produce the smell and smoke that constitute the ur-experience of sucking in second-hand byproducts): total cost 64 euros. That's a cost per pack of $6.63… not bad you might say, given that the cost of a pack in Massachusetts was recently pegged at $7.04 (by contrast it's $5.46 in "tax-free" New Hampshire; and it's $5.51 on average across the U.S.). However, remember the nominal marginal income tax rate in France, and the significantly lower average individual income per year. Tobacco is, in a more pronounced way, a legal drug here in La Belle France, with that many more financial reasons to need one for relief of one's troubles.

Hence in a small farming community, of the sort which any one of the villages surrounding mine constitutes, where there is a larger aggregate number of retirees, and the rest of the people are tradespeople, blue collar workers, farmers or farm workers, there is a much greater number of smokers. And they are still free from the encumbrance of no-smoking laws as long as they are sitting (standing, kneeling, squatting, hunched over or lying) outside. Go to any café and the air is redolent (if that's the word) with cigarette scent, but worse, with the smoke itself. If there is air, it is the unconscious air of a race that is used to, long since, living in close quarters to their fellow creatures, with the accompanying blatant disregard of that which many an American is so zealous to protect: personal space. So cigarettes dangle from fingers and lips in any number of angles and precarious states of balance kept unconsciously and insouciant by the smoker. I've watched smokers, at home and abroad, and what dwindling number of smokers I see in the U.S., who suck down their poison in public view, are far more avid and frequent puffers. The French, equally indolent by contrast in this habit as in so many other behaviors, puff far less often, and allow the smoke to circulate far more generously—I've always seconded the view that, despite the apprehensions of American tourists, the French are a warm and generous people at heart. At bottom, they clearly pay little heed to where the smoke they've paid dearly for drifts and swirls, eventually finding its way into the lungs of every nearby individual, citizen and visitor alike.

But the purpose of this late assortment of peevish observances on the specific, if not hoary, subject of smokers' abuse of others' rights, however slender is the sanction by law, is to observe one more thing.

Again, this is purely by observation and anecdotal personal data collection, but it seems in the 23 years I have been visiting and part-time inhabiting these climes, I have seen what I would call a wanton increase in a brand's market share among these people who are otherwise among the most chauvinistic I have ever viewed. It's not Gauloise, a brand the smoking of which was well-nigh patriotic and a duty during World War II (still the Big One for the French, despite their own misadventures in what they call Indo-China, and despite the misfortunes of an embarrassing set of protracted repressive exertions—of which the present ugliness in Libya, for all its ghastly excesses, is only a mere reminiscence—in France's last colonial hurrah: Algeria).

It's Marlboro, still flagship and pride of the fleet formerly known as Philip Morris, and now designated by the innocuous, meaningless, and virtually pseudonymous Altria Group. It means not very much, if anything at all, to the French who suck down the smoke of that cancer-plagued throwback, the Marlboro Man, and irrespective of gender or age (virtually; it's still difficult to purchase tobacco products in France if you look anywhere close to 16 years of age… though I've seen butts alight in the hands of children), who tap tap tap the filtered end to tamp down the tobacco, in a gesture that is only one of so many symphonic gestures that somehow romanticize an act that amounts, after all, to an act of excruciatingly slow self-immolation.

Full Disclosure: I used to smoke cigarettes, including Gauloises and even Marlboros, which were the brand I favored if only to assist in my last gasps, as I forcibly quit cold turkey at the age of 24. I will never, I am sure, forgive myself.

2 thoughts on “
Another Triumph for Philip Morris
”