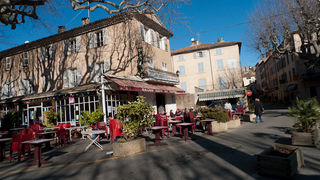 Perhaps it’s the penetrating energy from the mid-morning sun on the terrace of the Grand Café du Cours. It is set, bare and unrelenting in a peerless Provençal sky, unmarred save by the tiniest wisp of a cloud that dissipates before I can capture it in camera memory.

Perhaps it’s the seven tables of rural flaneurs, taking a break, a mink coat here, a deep bronze tan there, the smoking cadres of brunette pony-tails (literally smoking—it’s permissible only out of doors).

Whatever it is, the aromatics of the coffee this morning are redolent, inducing only the best stirrings of gastric juices and saliva. The lure of it pierces even the thick crema that is the special draw of the espresso at the Grand Café, penetrating the nostrils and the gorge.

One stalwart, seated nearby, in a beret, with a massive gold signet ring and a thick moustache, chomping on a croissant extracted from the flimsy bag of the boulangerie, peers at the morning paper through his wire-framed glasses. The rest of the crowd, including me, have put on our shades. The sun’s beams are incessant, blinding.

I hear the patron, rushing in and out of the café with trays laden first with full cups and then with empties, pause to explain the uncommon warmth to the beret, as they peruse the thermometer mounted on a promotional enameled plaque courtesy of Martini & Rossi on the wall just above my head and just shaded by the awning extended only a meter or so—to maximize both the accuracy of a reading and the exposure of the clients. “Treize,” he says, “c’est treize!” and he points to the awning and the shaded gauge. Thirteen degrees (almost 56F, the floor of true warmth, especially smack in the middle of January, and with the seductive promise of true shirt-sleeve weather this afternoon). It’s only 11:30 and the sun will bake the open spaces into a hint of sultriness.

Six old-timers arrive and debate their first choice of table. One of them, the smallest and the baldest, argues, pointing to larger more exposed choices to their right, “Le soleil! Le soleil la bas!” and then he points to the tiny square table meant for four in front of them. But five of them have already seated themselves in the shade of a shrub set in a concrete combination planter and traffic barrier. The shrub stands a meter high, and so one corner of the table is, in fact, in shadow.

Save for one couple who have nursed a rosé (she) and a pastis (he) just beside me for the past half-hour, the crowd has exclusively been consuming the fragrant coffee in its many modes, mainly single espressos, the occasional double (including mine), a noisette here, an espresso “longue, très très longue” there. But the old guys are all here to drink, as I would have predicted, something a bit stronger. While they bake their bones and joke and jostle one another each savors his favorite tipple—in the tiniest of glasses. Even the beers are diminutive, perhaps a half of a “quart” (a quarter), that is, an eighth-liter or hardly more than four ounces. Another has a pastis, but, again, in a mini-portion. Another sips a sweet vermouth in a Lilliputian snifter, with an ice-cube crowding the spoonsful of alcohol. They are wetting their whistles. Mere lubricant for the fellowship that is their true purpose.

So much for the myth of mid-day French drinking.

Except for us solitary worshipers, or observers, or thinkers or diners, every table buzzes with talk. The French do talk.

But so do the Brits, and the Germans. The British are loud as their orange-y tans, the Germans sotto voce. The French adopt a uniform conversational tone, setting a universal and incomprehensible buzz, mixing with the heated currents of fresh air and the blinding rays of the relentless sun.

It is almost noon. The siren on the Town Hall will wail soon and for several minutes the shadows from that shrub adjoining the old-timers will disappear from the table top. 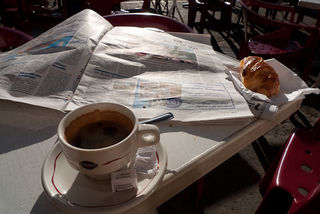