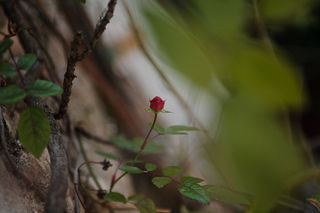 There is a window in the bed-alcove on the second floor (“premier étage” or first floor, according to the French scheme of things). It’s also not really a bed-alcove, but the hallway between the doorway from the stairs arising from the street floor to the doorway that allows access to the stairs to the third floor (that’s right, here it’s the “second”). Not a barren space at all, but currently quite minimal. It contains a small table with drawer, it’s some kind of hardwood, stained very dark, and on it sits a very elegant silver-colored lamp, with an oval shade of linen. The lamp is controlled by the light switch on the wall, just to the right of the doorway as you walk onto the tiled floor. On the table is also a piece of sculpture from my talented and dear friend Pascal Masi, who has a love for and penchant for excellent art inspired by the fauna of the Arctic and Antarctic (his name is sufficient, Google him, you won’t be disappointed). It is a bear, lying on its back, in a kind of active repose—the very spirit of the village and the house.

The floor is covered in “tomettes,” the characteristic terra cotta hexagonal tiles that are the hallmark of the Provençal tilemaker’s art. Tomettes are available in a variety of sizes. These measure about three inches to a side, and so the entire tile would fit in an approximately five-and-a-half inch square. They are a deep russet. And each is, of course, a geometric metaphor for France itself, known, at least to the French, as “Le Hexagone,” because of the shape of the country itself.

On this floor, in this hallway, there is a built-in wooden closet, with double doors, lockable. Though the key remains always in the lock; what we call a skeleton key. The half-door not secured by the lock has a sliding bar that anchors it to the door frame of the closet. The closet is in a corner, facing the door that leads to the stairway to the third floor. The closet is as deep as the dimensions allow. Most of the design on this floor is determined by the depth of the stairs leading up from below, and further up from this floor to the next. Shallow steps, which would allow for more floor space, and deeper closets, would be treacherous to climb, and anxiety-making. If there is any design principle at work for the past, oh, I’d say, six centuries, it’s to avoid any unnecessary anxiety as one negotiates the configuration of one’s home.

This does not mean generally, from one house to another, there are not some strange obstacles to access—one room to another, or one floor to another. Winding stairways with extremely steep risers, for example. Some would say the ubiquitous tile is treacherous in and of itself, given that it is the favorite flooring. But generations of French have grown up, and lived long lives, very long ones here in the country, without undue damage to their basic skeletal endowment. Some things become sui generis.

One thing that is sui generis is making the most of what little space one may have. Land is irreplaceable and the supply is as we find it. Hence, I would suggest, for example, the French habit of putting their vehicles wherever they will fit, without unduly inconveniencing their fellows, or obstructing the passage of other vehicles. Same principle.

In all events, back in my second floor hallway, there is a closet, and it is quite shallow. This does not mean it is not usable. Rather, it is quite empty, save for the vacuum cleaner and its parts. Linda and I, much as we had built a “French” clothing wardrobe here over the years, so that we could at least be assured of some minimal fussing over what to pack, given that we knew there were clothes for us in France, nevertheless had not exhausted the other, ample, space afforded us by what was built into the house. For example, there is another, much larger, closet, more like an armoire incorporated into the structure of the bedroom, organically, if you will in the master bedroom.

Anyway, we discovered that, though there was a bar installed in the hallway closet, the enclosure itself was too shallow to accommodate modern hangers. We discovered this when we bought a household-worth of wooden hangers (being acolytes of Joan Crawford). However, the modern hanger, which accommodates the clothing that fits the frame of modern humans, will hang without trouble, even in this narrow space, if carefully suspended at an angle. And so the hangers hang, as the lyrics from “The Mikado” put it, “in serried ranks assembled.” So far, not one of a succession of guests has complained.

Quand même as it’s said in French (“nevertheless” or perhaps, “whatever”), I started in the hallway, and I am back in the hallway.

Today, I was installing weatherstripping. It will clearly be inadequate, as it was designed for new windows. My windows are not new. They are not medieval (I don’t believe many windows from the era had framed glass casements), but they are not modern. And they do not fit properly. And neither does the weatherstripping.

In all events, as I hung out the window, as I attempted to get the weatherstripping to stick, with its “elastomeric” adhesive, “re-locatable” and “good for all surfaces” I noticed just below the line of sight of the window, where I have always known there to be not only grape vines criss-crossing the facade (a major attraction to the house when I first saw it for sale in late fall, festooned with fiery orange grape leaves and the tiny grapes that grow among them), but a rose bush, of some venerable history, intertwined among the vines. These are also, as you might imagine, a feature of the house, in terms of “curb appeal” though there are no curbs, of course. I have printed and published photos of the lovely blood red rose specimens that appear every year without fail, and without care or even minimal monitoring.

On the rose bush, snaking among the vines, and even as we are in the midst just barely of mid-winter, are buds, promising an early spring. As I predicted in an earlier post on this blog. I have checked the almond tree near the cemetery, which is the un-official harbinger of spring—the almond tree that has been blossoming earlier and earlier as the years spin eternally—and indeed there the signs of buds, proto-buds, if you will. But nothing to compare to the few rare embryonic blooms that hang so carelessly from the front of my house.

However, in a mere four days, I leave. And when I do, I will shut up the house. I will unplug everything non-essential, as there are, inevitably, horrendous electrical storms in the spring—which is fast coming upon us here in the Haut Var. I will check all the water taps twice, if not three times, to make sure there is no chance of a random drip. I will tighten the valve on the gas tank for the stove to within a millimeter of its tenuous grip. I will shut down the circuit breaker for the hot water heater, which will otherwise make hot water continually, even as the empty house pings and creaks, and cracks and whispers in the absence of any humans to take advantage of the luxury.

I will pack up all the perishable food that is still of any use and ceremoniously present it to Rudolf and Nicole across the way just before I drive off, and who will make what use of it they will, being the sensible parsimonious citizens we all must be in these parlous times. And I will try to make sure that I dispose of every last gram of disposable or recyclable waste—so that I needn’t make an urgent call to Rudolf from Nice, from my hotel the night before my departure, to ask if he would not mind, please, entering the house, and grabbing the bag of poubelle (garbage) I have left, absent-mindedly, leaning against the wall in the kitchen under the framed posters of varieties of French olives and tomatoes.

I will run up and down the stairs, checking once, twice, three times, to make sure I have left the house in what is for me impeccably neat condition, as if the former mistress of the maison were expected at some future date, and would frown silently at the less than spotless condition—even though I know, as she knew, that, given the length of our predictable absence, there would be dust in every corner, and swirls of detritus huddling across every square inch of floor, and cobwebs festooned between the latched windows, weatherproofed or not, and the shutters shut tight beyond them. There will be dead scorpions in shoes, and dead bugs of arcane taxonomy in every bowl and cooking pan in the pantry cabinets.

Then I will pack the car, and drive off, not sure of the date of my next visit, though this is the universal question, from each neighbor and friend. “When will you be back?” And as always, I cannot, for all the poids lourds of the freight of this question (“heavy load”), answer with any precision. All that hangs on my heart is the weight, not only of the query, and the expectancy, and the unspoken emotion behind it, but thoughts, spontaneous and simultaneous, as if weeks and months of time were compressed into an instant, and I could see in that instant every moment of every event to occur in the time of my absence—sights and sounds, never mind people, that I will miss until I do return. It is never soon enough.

But what I know I will miss, with a certainty that almost pushes me out that second story window, what I will miss is seeing these dear buds blossom and mature and grow into full flower under the eternal cyclic life-giving sun of the dearest place on earth.