Although there is a permanent means of subscribing that’a’way (<), in the left-hand column, it is kind of buried.

So, periodically, I’ll put the link in your face, as I’m doing here.

Once you subscribe by this means, you will get an email reminder every time I publish a new post, including an excerpt and a link to the full post on this site.

Here’s the mechanism for subscribing by email:

You can also, of course, subscribe to a feed, which amounts to the same thing. Look for the little RSS logo and click on it, and your browser will ask you how you want to take care of the rest. If you don’t know what RSS or a feed is, this may be a mistake until you find out.

Braising dish or deep paella pan with a domed lid, preferably about 13” in diameter

2 Large turkey thighs (to really do it right, have the butcher use a meat saw to cut the thighs in two, transversely, that is, so there’s half the thigh bone in each half; you would end up with four halves this way), at least 1-1/4 lbs each, preferably a bit more [make sure they use a saw; poultry bones splinter… your guests will be crunching on tiny slivers of turkey bone thinking they’ve broken a tooth or a crown]

1 28-oz can of San Marzano whole tomatoes, grown and packed in Italy (use others, like from the U.S., but most of them are bland, unappetizing, and will make this dish taste a little less swell; they are increasingly cultivated in other countries; San Marzano is a variety of plum tomato, originating in the commune of San Marzano in the Campania region of Italy; the best of this variety comes from this region)

1 cup, more or less, robust red wine (I use an Australian Shiraz, though any syrah will do; or a Mourvedre, a Sangiovese, a chianti, a pinot noir, a Cahors Malbec)

3-4 whole cloves of garlic (or even more if you like garlic) skinned, with the green shoot removed from within the cloves, finely chopped

3-4 Tablespoons extra virgin olive oil (I shouldn’t have to say this, but use French or Italian olive oil; they’re better), plus a little extra

12 ounces dried pappardelle pasta (preferably imported from Italy; god luck finding pappardelle made in this country, unless it’s fresh made)

Rub the turkey thighs with olive oil so each one (or each half of one) is completely coated. Try not to disturb the skin on the turkey. Grind some black pepper coarsely on both surfaces of each thigh, and sprinkle both surfaces with a little sea salt.

In the braising dish with a domed lid or the equivalent, heat 2 tablespoons of olive oil over a medium-high flame.

When the oil is hot, and not smoking, place the turkey pieces skin-side down in the hot oil. Allow to brown well (kind of a deep mahogany) and turn to brown the other side equally. Set aside the turkey when done.

While the turkey is browning (it should take at least four minutes to a side, if the flame is adjusted properly, and you haven’t burned it by that point), drain the can of tomatoes into a bowl, preserving the tomato juice/puree, discard the remnants of basil leaves in which they are traditionally packed, and getting the tomatoes themselves as free of liquid as you can.

Add another tablespoon or so of olive oil to the hot pan, after removing the turkey pieces to a plate or platter.

When the added oil is heated, add all the chopped aromatics (garlic, onion, fennel, celery) and mix well, coating every bit, in the pan. It should all be sizzling in about a minute or two. Turn down the heat to medium-low or low, and cover the pan.

Let the aromatics sweat until limp and translucent.

Remove the cover and stir the aromatics, and then add all the chopped tomatoes. Mix everything to disperse the tomatoes, and recover over the same heat. Allow the tomatoes to sweat for maybe three to five minutes.

Remove the cover, and there should be a fair amount of water, released from the tomatoes and other aromatics. Turn up the heat to medium-high or even high, if you’re prepared to be vigilant, and stir the aromatics occasionally (every half-minute or so) until the water is almost all boiled off, and the aromatics have formed a thick jelly.

Turn down the heat to medium-low, and add each turkey piece, skin-side up to the pan, trying to avoid having the pieces touch (they shouldn’t in a 13″ pan). Spoon the aromatics that are not under the turkey on top of each piece of turkey, distributing it evenly, and coating each piece completely with the aromatics.

Pour the tomato juice you drained into the pan.

Add the Marsala (or other fortified) wine.

Turn up the heat to medium-high.

Add the wine, trying to distribute it evenly without pouring it directly on the turkey.

Sprinkle the cocoa evenly over the liquid, but not the turkey. Stir carefully into the liquid.

Sprinkle a shot or two of fish sauce in — no more than a 1/4 teaspoon or so. This stuff is killer salty, in addition to being a ready source of umame, which is why I say put it in.

Now add as much stock as is needed to bring the level of the liquid in the pan about half-way up the height of the turkey pieces. Stir the liquid so it’s well blended, stirring carefully so as not to disturb the turkey or the aromatics coating the pieces.

When the liquid has begun to boil, turn down heat to a simmer, or slightly less. Re-cover the pan.

Check in two or three minutes to make sure the liquid is barely simmering.

Periodically (no longer than every 15-20 minutes) uncover the pan and spoon the pan juices over each piece of turkey carefully, not disturbing the aromatics covering each piece).

Halfway into the cooking, at least an hour or so (this is more by way of “feel” or intuition; braising is inexact, and you will be a way from being able to tell if the meat is tenderizing sufficiently), turn over each piece of turkey with tongs, and recover with aromatics piled on each piece.

Cook for at least two or two and-a-half hours, the longer the better. Test for doneness, but sticking the tine of a carving fork or a metal barbecue skewer into the turkey. It should enter the flesh and be withdrawn with not very much effort (in short, it should be very very tender). Have tongs at the ready to hold the meat down while you extract the fork (if needed; and if so, the meat isn’t tender enough)

Start a large stockpot of water for the pasta on a high flame to reach boiling.

Scrape the coatings off each piece of turkey, and remove the turkey with tongs to a heated platter. Set aside.

Turn the heat to high.

Reduce the liquid and aromatics in the pan, stirring regularly, scraping the sides and bottom of the pan, until they are a very thick sauce, the liquid should be the consistency of heavy cream or maple syrup draining off the spoon.

[You may also add the extra step of setting the turkey aside on a heated platter and covering loosely with a “tent” of aluminum foil. Strain the sauce filled with aromatics through a very fine sieve. Use a wooden spoon gently to force all the liquid out of the solids. Don’t try to crush the solids to get out every drop of liquid. You can press on the pulp. You’ll get it with practice. This extra step produces a more unctuous, almost soigné version of this still very meaty robust sauce.]

Place the turkey back in the pan with the sauce, turn down the heat, and spoon the sauce over the turkey. Re-cover and set the flame to the lowest setting possible, or simply turn off the flame.

When the pasta water is boiling, add a palm-full of kosher salt to the pot (sea salt is OK also, but it’s more expensive). Add the pappardelle noodles to the pot and stir and cook to direction. Imported dried pasta should cook to al dente firmness in about four minutes.

When the pasta is ready, turn the flame on under the turkey (if you have turned it off) to lowest setting, just to regain any heat lost, and keep the cover covered.

Drain the pasta and distribute to four plates.

Serve the turkey on top of the pasta, and spoon an ample amount of sauce over the turkey and pasta on each plate. If you have not had your butcher cut the thighs in two as suggested, the meat should be so tender that you can serve it out of the pan, cutting each thigh in two using the edge of a large cooking spoon. Two of the lucky diners will get the piece with the bone to gnaw on.

[Note: you can enrich this recipe and the flavor even further, by adding dried porcini mushrooms that have been revived in hot beef stock and a little wine for about a half hour; do this when you start the recipe; add the mushrooms and their liquid (about 1 to 1-1/2 ounces of dried mushrooms in about 1/2 to 3/4 cup of stock and a little wine) at the same time you add the wine and the beef stock to the pan as braising liquid; you should still maintain the “no higher than half way up the sides of the turkey pieces” rule, so just add less beef stock.] 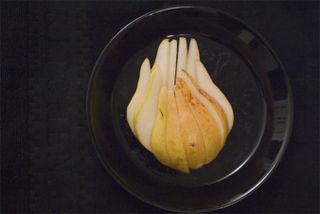 This is not the pear in question. This is, for one thing, not a comice pear. Indeed, strictly speaking, this is not a pear at all.

I have just eaten a perfectly ripe comice pear. It sat on the cutting board on top of a utility cart full of cooking implements and wine. It was there for about five days now.

It is my lunch.

I divided it using one of those metal nine or eleven bladed rings that cut the fruit in slices and at the same time core it.

If it were possible to make candy that tastes like that pear, it would give whoever did so the chance to know in one very tiny way what’s it like to be a god. It only seems simple for a moment.