[a poem, the first I've written in 25 years; I started as a poet, many many years ago, as a much younger man; this may be the last again, for a while… I hope not] 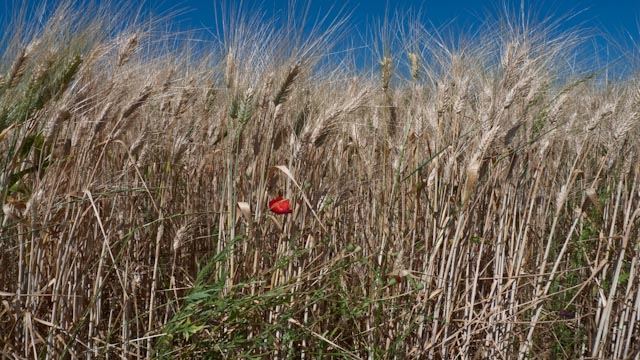 For all of them alive I love, in memory of all I loved, now dead

Why would one do this here?

We live in an age no longer sanctified,
No sense of holiness.

We flew Swiss Airlines
Appropriately enough.
The Swiss, bankers to the world,
With noble hearts they bore us (for the mere price of half a pound of our own sweet skin and meat):
Silver, gold, platinum perhaps (in first class);
No living tissue in them to wear out,
Respond to suspect human needs;
We flew up front, and drank champagne,
The sacrament of business class.

They fed us the well-fed flesh of beef,
Blood red,
Plates and silver clinking under the din of mighty turbines.

And then we slept, dreamless
Far beyond the surly bonds of ice-cold seas
And the dirty ground.

No need belabor the swift journey to the village.
We drove into the place,
This ancient scene of peace
And calm and tranquil solitude
On rented wheels (every ding and dent and crimp
Of lacquered metal noted for the ledger, the last act
As we roared away from that other world of rude affairs
In the city by the sea far below us).

Here in the land where men, still called peasants,
Still whack
And flay and harrow the land.

There is no business here but one.

The eternal preservation men may keep of the
Adamantine cord one sees only here,
A sky-blue thread, tying us to the infinite.
For you can see it in the sky,
That unblemished unending deep transparency,
Sun the same hot ball of self-consumption,
Surrounded as you are
By the everlasting green of growth
That never stops,
Signifies an everlasting life,
A life for life.

For the infinite eternal everlasting business here
Is to feed the living and
Let the ground accept the dead.

I walk the fields
Where generations trod
The fields of wheat
That for centuries
Have fed the lusty appetites of men of war:
The Romans, Goths, and Gauls,
The Templars who, tipping stone on stone,
Built this hill-top village,
This everlasting place
Outlasting them, outlasting all since,
The bond personified, the anchor for
That tie to the infinite,
That much closer to the sky.

I walk the fields.

The fields of wheat and poppy.
The wheat, for life.
The poppies, for that sleep that does not end.

And only some, the ones who leave
This village for the world at large,
Can feel that bond, the tug of that tie
That draws them back.

The ones who shipwrecked,
Yet were saved,
Return to thank who they will,
The Virgin, if they believe,
Or what Gods they may,
Or none, but the place itself,
The peace that reigns here.

And I leave the plain,
Walking the steep pistes
Of the protective hill,
So steep, breath comes short
And hard, for the effort that
Draws me to the top.

And I hear echoes of the breaths
Of one who came here
For the bond was strong
And drew her here
For those last days
Of peace and calm,
And the breaths were hard
And loud, each one a tugging
At that cord.

And harder, sharper still
Through the long night,
Until just at sunrise,
As the blue infused the sky,
They stopped.

And there was peace.

And peace of course
There is still.

And the village sleeps
And wakes.