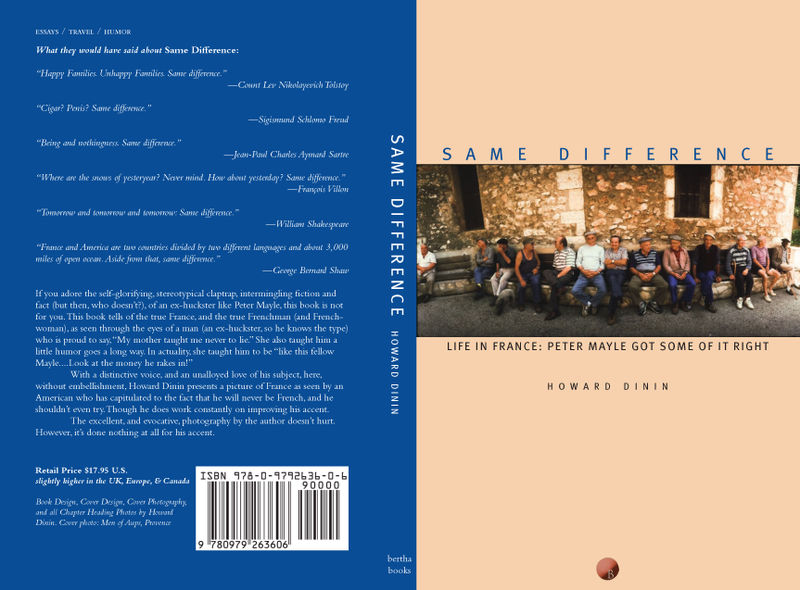 This is the cover of the commercial release, recently out of proof, and ready for production. There are still copies available right now of the Special Limited Edition, with the notorious limited edition “big ass cover,” available signed and numbered (in an edition of 100) and meant for private distribution, and accessible at the URL below

If you want the commercial release, in its first edition, with the cover shown here, admittedly more reflective of the subject matter, the tone, the character of the writing, and far less likely to draw snickers and complaints from friends and strangers alike, you’ll have to wait. There will be an announcement of availability, for on-line purchase and sales in a first run of a limited number of retail outlets.

I am still pondering Amazon sales options, and still actively seeking either an agent or a publisher to handle distribution and marketing.

But why wait, it’s available now in a Private Limited Edition, bound to be a notorious collector’s item?

Or wait. I need the money, but it’s OK. I don’t want you to be unhappy.

If you can’t wait, or pity or unbridled enthusiasm for my irrepressible and unique personality and creativity motivate you to act now, here’s the URL of a secure Web page to take your order for a book I will rush to you personally, as fast as my medium size legs can take me to the post office:

Yes, I’m at it again (and will be again and again…). I’ll only offer this disclaimer periodically. I gave the guy money. I voted for the guy. But his proof is in the pudding of the Presidency… He’s learning the hard side of Washington politics, and there’s no reason we citizens should let up on him. 200+ years of precedent make it so damn easy to do it the way it almost always has been done.

Look where it got us.

No man is so honest he can’t use a daily reminder to stay that way. So be that guy in Caesar’s chariot whispering in his ear as he rides in triumph into Washington, uh, Rome…

No doubt the usual suspects will find something to give me shit about. I’ll have at the Big O. You have at me… I can take it.

In the meantime, it won’t hurt if you give him your two cents also. Everyone should. If everyone in the country did, why that would be $6,000,000. I think the government goes through that about every 15 seconds, or something equally appalling.

http://www.whitehouse.gov go to the link in the upper left corner that says ‘Contact Us’

“You disappoint in significant ways. Allowing Mr. Geithner to prevail on phase 2 of the banking bailout is same old same old. I’m surprised there’s no provision for fruit baskets and discount coupons for body man services for bank executives. You promised real change in government. The bankers who enabled this mess deserve censure, if not divestiture and removal, if not outright prosecution. This isn’t real change, it’s Small Change: the name of the homeless newspaper here in Cambridge.”

With the same bulldog tenacity that Charlton Heston used famously to pledge that his weapon of choice—the type that fires explosive and destructive ammunition, i.e., bullets—would have to be pried from his dead cold fingers before he would relinquish it voluntarily, law or no law, President Obama nowhere nearly as famously has indicated his attachment for his weapon of choice. The President’s Blackberry, still in his possession as far as I know, is armed no doubt with equally potentially deadly ammunition, the fruits of the President’s justly deserved reputation for rhetorical skill, i.e., words.

His new White House website pledges, on his behalf, that “President Obama is committed to creating the most open and accessible administration in American history.” You will find this pledge on the page, entitled ‘Contact Us.’ And below that, you will find an online form on which to identify yourself, and to leave a 500-character message (360 characters more than are allowed for a “Tweet” on Twitter.com, but 4500 characters fewer than you are allowed in a “Yelp” on Yelp.com), no doubt a compromise, which the Big O is learning to make not on a daily basis, but it seems increasingly on an hourly basis.

Previously, one could not email President Bush, though constituents, which, like it or not, for eight years meant all of us, were encouraged to use the now beleaguered (and significantly destitute) US Postal Service to send him that quaint form of communication called a letter. There was a promise that the White House would respond in kind, in time.

One still cannot email the President, either officially or directly to his zealously guarded Blackberry (unless you are among the holders of that elusive string of characters that identify the Big O in the ether), though, I would suggest, it hardly matters. As I, without fame, attention or regard except from my handful of loyal followers, have had cause to observe mere weeks ago in this same forum, email is dead. No loss.

Nevertheless, it is encouraging to imagine that with some greater rapidity, the White House staff will see whatever it is we may have on our little minds to opine. It remains to be seen how quickly and in what form they will respond.

Somewhat incredibly to me, the Big O has been in office a mere two weeks. It only seems longer I am sure, because of the intensity and publicity of the “Transition Period,” aided by what I suspect is the intellectual and sensory state of shock so many of us citizens are suffering finally, and unbelievingly, as a result of seeing the back of George Walker Bush.

Yet, for the brevity of the Big O’s tenure, some signs have appeared long since that not only will the recovery we now long for, with the same fervent and devout passion we wished for the departure of the Bush man, take a very long time, and will be terribly painful to endure. As well, it would appear, there will be a great deal more of business as usual in Washington, despite a great many promises to the contrary, over the course of what amounted to a two-year campaign for the Presidency.

I have had occasion three times now, in these two weeks, to leave (each time) almost my entire allotment of characters for the President’s delectation, or at least, I hope, for the attention of somebody with a brain in his head who is, if nothing else, tallying the sentiments of the public with enough gumption and initiative to use this new form of communication to address this “most open and accessible administration.” My first two communiqués merely urged the White House to do everything possible to get the Congress off its ass, and to quit partisan politics, and start taking concrete steps already to put a working recovery in place—since, in the meanwhile, as we all continue to suffer one way or another, there is nothing working in the way of recovery. I have heard nothing back. And of course, “nothing” is the best way to describe what seems to be happening in Washington.

Today, having been closely following any of a number of stories issuing from Washington about the status quo, the status quo ante (which still makes the news, as the financial and economic  casualties continue to pile up), and the status quo devoutly to be wished, which it would appear at the moment consists of the same stale winds that have blown out of the District of Columbia since it was a fetid swamp when a bunch of guys decided to say “fife” to the King and start a new country, I decided to address a different topic. The topic is ethics—which many of you know is a subject near and dear to me—and the connection between this ancient idea of the proper way to govern ourselves as civilized human beings and the new administration.

The Big O, it seems to me, has a great deal more work to do than the mere institution on his first day in office of the most stringent ethics rules ever imposed by a new administration.

I’ve decided (and I know this will delight all of you) to start archiving my comments to the Big O and his boys and girls. And from time to time, I will post them here, probably in future without too much, if any, additional comment. If I have to constrain myself to anything less than five thousand words, you might as well reap the benefit. The reward for me is that the world will slowly come to realize that I actually can say something cogent in 500 characters or less.

Here’s today’s message to the Big O. I don’t think it will appear ever on his Blackberry, but as Hemingway wrote at the end of The Sun Also Rises, “Isn’t it pretty to think so?”:

“It is dismaying to see Mr. Geithner and Mr. Daschle get not only a ‘free pass’ but unqualified support from you, in an atmosphere of long-promised and vaunted sweeping ethics reform. Why Mr. Richardson was permitted, or encouraged, to do the right thing with the mere threat of unsubstantiated allegations of corruption, while these two admitted miscreants continue to hold or seek office is beyond me. Bad old wine in a new bottle is still vinegar. I hope action is in the works to replace them.”

I encourage all conscientious citizens to hie themselves, frequently, to http://www.whitehouse.gov, and click on “Contact Us” in the upper right, and give them 500 characters worth of a piece of your mind…

Bush may make the Big O look like Jesus Christ, but he still has to prove himself. He’s done nothing yet to let himself off the hook.