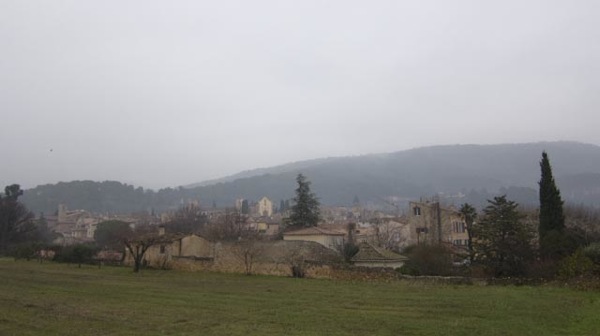 Perhaps it’s my mood. Perhaps it’s that I have been here it will be two weeks tomorrow. It has been sunny for two of those days. At least overcast the rest. Today is a corker. But before I get to today, let me do a quick review.

There seem to be three kinds of overcast here: a sort of uniform dun color, cloudless and without variation. Or there are variations, a sort of mottling of the grey, from a deep shade to one that is almost white. And finally, there are discernible clouds, at their best with breaks that allow the sun to peek through. When and if the sun does appear on such days, it is never for long. Rarely is there precipitation in its usual forms, rain or snow. However it has rained I’d say for about six days out of the 11 that have been overcast; one day it poured all day. On that day, the one before Christmas Eve, Yann informs me that the water in his pool in Aups rose about 2-1/2 inches. Other days it rained on and off, usually lightly, and one day, it snowed in the late afternoon for perhaps three-quarters of an hour. I took a photo of the light blanket of snow in the village square in front of my house—the one with a tree that is variably 225 to almost 600 years old, depending on the historian and tree expert who is making the assessment. I posted the photo on Facebook and put in what was then a mirthful and sarcastic caption, aimed at my friends in the Northeast of the U.S., who were braced for a blizzard that dumped anywhere from a foot to a foot and-a-half of the white stuff. It had snowed, and I was being generous, perhaps an inch-and-a-half here. The following day, the sun made one of its rare appearances. The temperature rose into the high 40s. And all the snow had disappeared at about the same time it started to snow 24 hours previously.

Aside from the overcast, the temperature ranges within a narrow band on such days between 33 or 34 degrees fahrenheit to barely 41. Most days it has been within a narrower range, of 37-43 degrees, not quite enough for snow. For years and years snow was rare. More recently, the natives can expect to see snow every year at least once or twice. It predictably will snow every year that the towns and villages have apportioned a part of one year’s budget to acquiring a snow plow. They are assiduous enough that the snow is gone from all the local roads within less than a day of the end of a snowfall.

My mood, which seems in sync with the weather, is tempered by at least one recollection of this time of year, and actually several, which themselves are linked together. My late wife and I first came to Fox-Amphoux in the dead of winter in the year 2000. We had decided tentatively to purchase a house in the south of France. We thought the prudent thing to do was to visit at other times of year than the optimal high seasons of warm weather, late spring to early summer, and fall through October. These had been the only times we had previously traveled to our beloved Provence. The discovery that our nearby market town, Aups, was also a significant truffle market in the late fall through early spring seemed to be promising, and the further discovery that the truffle harvest hit a high note with the fêtes des truffes which occurred traditionally on the fourth sunday of January, which in that coming year would occur virtually on my birthday… an augury if there ever was one. We booked rooms at the Inn in old Fox, the inn that is now across the square from my front door. As it turned out, that visit was a clincher, more or less. The weather was ideal almost throughout, with the singular irony that only on the day of the truffle celebration did it turn bitterly cold and overcast. “Cold” is of course a relative term. The Foxois and the Aupsois assured us it was cold. It was just freezing, what we came to learn was a typical temperature in winter, at least at the start of the day.

Further recollections of past sojourns at this time of year are more and more dark. Linda was diagnosed at the beginning of January in 2003 with the cancer to which she would eventually succumb. It was only the first winter here she would miss, though she was to have a chance to return. She would from time to time insist I visit chez nous, alone if need be, in order to have some respite, though she would always say over my protestations that it was important that we use the house, and check on it, regularly. I won’t belabor this account with remembrances of the several visits I made, sometimes by myself, and sometimes with friends, until she died, and then again the same year. That had been my last visit until now.

Last year, of course, my new, but once again late, beloved Jody and I were on the eve of leaving for Fox, for her long anticipated trip with me for the holidays. It would have been our first chance to return after the magical summer we spent together in 2009. This was not to be. That day, the good doctors at Brigham and Women’s Hospital found the tumor, which would lead to her demise, a scant two months ago tomorrow. And I cancelled our flight and our trip that night.

My present sojourn is my first chance to return since another much briefer, also magical, journey for Jody last July. It was perhaps the last time as well that she enjoyed anything that resembled a break from her almost unceasing ordeal since the previous January.

I am the wrong person to suggest that the weather, in fact, is in sync with my mood. I neither have the ego, nor the credulity. It is not bad here. It is fitting. And once again, I try to assure myself that this environment is the one most likely to induce a more rapid process of recovery for me. The time alone, if not total isolation, seems anodyne, if difficult to swallow, like necessary medicine.

The weather this visit that I’ve described is a first for me. It has induced a sense of claustrophobia about the house, which I’ve never experienced before. Today is a culmination of that feeling. The precipitation is truly that. There is nothing visible in the air, unless one looks into the middle distance, or any close surface, where the fine mist, almost a miasma, makes itself evident in the tiniest droplets of water imaginable. It shrouds windows and windshields, glasses and the screens of digital cameras. At speed in a vehicle, and only at speed, does it behave properly as precipitation. Otherwise it is more accurately a coalescence. Looking into the distance, toward familiar landmarks, only reveals what resembles flying through clouds. One can see only as far as what could be traversed in a minute or two on foot. The near foothills of the Alps have vanished. Greyness pervades, tempering everything, squeezing out all color but the most funereal of tints.

There is, I will admit, a somber beauty here even to what I describe. Like pieces of music in a minor key. Like paintings by Whistler or Eakins, umbral and vague.

The weatherman has predicted this weather will break, and we’ll see a return to the usual sunshine, clarity and crispness. Temperatures will climb into the 50s during the day, and barely reach freezing at night. That will happen with the coming of the new year.

I very much hope so.

The lowest level person working for the TSA that you are likely to encounter at an airport security checkpoint is what they call a TSO. Here is the job description, which appears under the rubric “Find Your Dream Job” on the TSA website:

Duties and Responsibilities: Implements security-screening procedures that are central to Transportation Security Administration (TSA) objectives and that will serve to protect the traveling public by preventing any deadly or dangerous objects from being transported onto an aircraft. Assists in conducting screening of passengers, baggage and cargo. May be required to conduct screening at any airport that provides commercial services to the public. Assists in monitoring the flow of passengers through the screening checkpoint to facilitate the orderly and efficient processing of passengers. Maintains close communication with supervisors regarding any issues that might reveal a weakness or vulnerable area of security screening that is discovered in the course of screening duties. Participates in information briefings concerning security-sensitive or classified information.

A TSO is paid a base salary in band D on the TSA wage scale. This pay does not include extra compensation, which is localized by assignment (location, hazard, etc.)

The TSA is actively recruiting.